An interview with freelance journalist Amand Kendall in her blog The Voluptuous Manifesto is probably the best way to describe "About Me"... 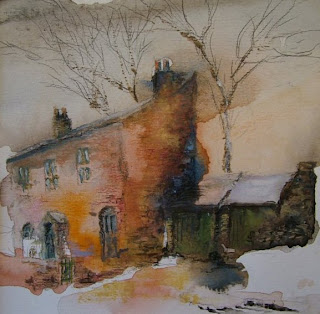 “I’ve always painted. I recall sitting on the back doorstep of a house that we lived in before we moved to the ‘posh’ suburb, and being shown how to draw mountains with clouds around the tops by my older cousin.

“So that would date it to pre-1964 and I’d be about six or seven years old.
“After that, I’d draw on anything I could get my hands on, mainly on sheets of brown wrapping paper which would arrive at the house from Brian Mills Catalogue (my mother was an ‘agent’ for our area).”
Two of Gary Kitchen’s paintings currently adorn the wall of my flat, and as someone I’ve known for some time via the world of UK Rugby League, it seemed obvious to ask him how he got started with a brush. 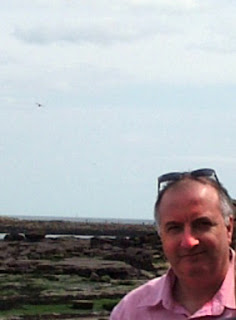 Predictably, Gary’s story is as colourful as I expected, having read his wonderful blog.
“My father’s office was one floor below the distributors for Walt Disney Films in Leeds,” he explains.
“He'd bring home lots of cinema posters for me to copy from or to draw on the back of: the people in that office would bring them down to him when a film had finished doing the rounds and they had the big advertising posters left over.
“This was still in the early ’60s and I had original posters for The Aristocrats, Jungle Book – anything that Disney released in the ’60s, I had.”
That must be some collection!
“No, I didn't keep any of them,” he admits wryly. “I copied everything though – I swear that at the age of nine I could have probably got a job at Disney!”
But it was while he was a pupil at Leeds Modern Grammar School that Gary started to take art seriously.
His form master – a man called Bernard Phillips – was also his art teacher. Gary says that “he was the sort of old-fashioned teacher who would take his class of 30 boys, identify half a dozen of them who had any talent, and then concentrate on them alone.
“We who got picked got almost one-to-one tuition on all of the technical skills of drawing and painting: colour mixing, perspective, styles of painting, colour harmonies: a priceless education and the only subject that I found I could actually do –  and enjoy.”
And that enjoyment was productive. Well, sort of.
“It was around that time that I was given a set of oil paints one Christmas and painted a picture of a horse’s head – very stylised and probably very corny – but my dad sold it at his local club and brought home orders for more.
“I painted that bloody horse’s head at least 10 times on the back of sheets of hardboard (the rough side). My dad made the frames and houses all over Meanwood hung my work on their walls.
“I didn’t see much of the money though – strange that, isn’t it?
“My dream is that, one day, in a Sotheby's somewhere across the world, a painting of a horse’s head in a crappy frame will turn up somewhere and will be attributed as ‘An early Kitchen’ – you never know!”
Gary went on to take an art A level in 1973. It was a time, he points out, when only around 20% of pupils went on to that level at all – and usually only those who were studying for “the professions”, so “you didn’t take ‘frivolous’ A levels without a definite plan to use them for something work-related.”
His own A level class – himself, one other boy and 20 girls – were taken to Leeds Art College one afternoon for an interview and an introduction to what lay in store; a degree course and a career in art.
“I hated it,” he says. “The college was full of bearded hippies doing weird things with paint and sculpture, and I didn't connect to any of it.”
Shortly after, he explains that he decided to pursue a more “commercial art-based career” after the class were taken on another tour – this time, to the art department of a large printing company.

There, they “let us have a go at what is now achieved using Photoshop on a computer. But then was done using magnifying glasses, colour negatives and chemicals to retouch original prints right down at pixel level.
“I left that place after one afternoon with a blinding headache and the stench of those chemicals in my nostrils – that was another art-based career crossed off the list then.”
Having taken technical drawing at O level, that was where Gary turned next, thinking he would become a draughtsman.

So in the summer of 1974, he left halfway through his A level studies and applied for three jobs – two with architectural practices and one at an electrical contractors where a small amount of drawing up schematic diagrams was involved.
“Fate decided that I was offered the job at the electrical contractors as a quantity surveyor that involved no draughting at all, and so art simply remained a hobby for the next 30 or so years.
“I still regret not taking up the architectural route and still have a love of architecture: maybe the discipline of fine detailed draughting wouldn't have suited my freehand drawings though?”
Even a brief glance through some of Gary’s paintings today reveals his love of the landscape – not least that of his home county of Yorkshire. He captures the moodiness of the county's hills in a way that conveys the dark romanticism of Heathcliff. 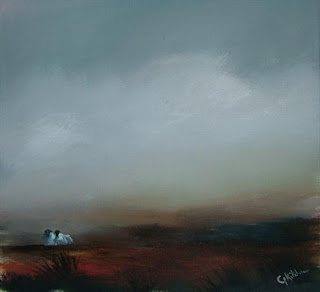 There’s a moodiness and bleakness that belies his rich palate: these are very evocative.
“I enjoy the landscape and love to observe other artists who specialise in semi-abstract landscape,” he explains.
“That’s where I like to think I'm going – contemporary artists like Kurt Jackson, John Mckinstry and the late John Blockley is where I want to be.”
Yet some of the moorland paintings are reminiscent of something older – more Turner-like in their depiction of the swirling, battering elements.

The one pictured left, with the sheep huddling, is one I particularly love. As is the beautifully blue seaside huts, reproduced below.
“I also like buildings – again in the abstract or in a simple pen and wash style like the late Sir Hugh Casson’s sketches, a real life architect who could switch off the precision penmanship needed to design buildings and just sketch with a wonderful freehand in ink and watercolour: he must have had two interchangeable brains to be able to do that …”
Gary’s studies included a year doing art history, “during which we studied the Flemish Masters …”
Brilliant!
“I hated every minute of it.”
Oh.
“I dropped the subject at the end of the year and can honestly say that I don't connect to any form of historical art until the French and English Impressionists of the 19th and early 20th Century – with one exception, Turner.”
Ah ha.
“I went to an exhibition of watercolour sketches that he made while touring the North of England. It was in the cellar gallery of Harewood House, and standing up really close – with no barriers to hold you beyond arms length – to a genuine Turner sketch is magical.” 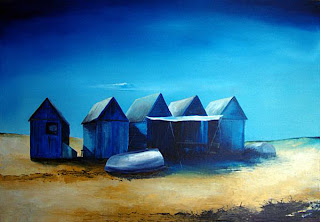 His favourite gallery remains the The National Gallery of Scotland, where they have a small collection of French Impressionists: a couple of Van Gogh, a couple of Monet and “a pair from my favourite pointillist, Seurat”.
“Again you are unhindered by ropes and barriers and can ‘feel’ the works properly. It’s hard to explain. but the rest of the gallery leaves me cold. It’s the two Impressionist rooms that do it for me.”
One of the other subjects that Gary paints is Rugby League. After attending his first game as a nine-year-old in 1966 – a night fixture between Leeds and Castleford – he was “hooked".
“There’s an honesty to the game that appeals: an awe that they are doing something that is relatively simple to do – the rules are never complicated: anyone could pick up a ball and run with it – but you just know that never in your wildest dreams or daftest moments would you ever dare to do anything like those professional athletes do.
“There is a reason why millionaire professional football players attend Rugby League games and profess to being huge fans, and it’s for the same reason that us mere mortals attend too – they see athletes doing what athletes shouldn’t do.
“It goes against all logic to build up the physique and stamina of a professional rugby player and then spend 80 minutes running into collisions that match car crashes in their intensity - but that’s what they do, for very little money, and that is its appeal.”
So where next for Gary?
“I’m 56 years old now, so in 10 years time, I’d suppose I should be retired, but in these extraordinary times, I just don’t see that happening.
“I’ll paint until the brain stops working, until they prise the brush from my hand and tell me its time for the overdose of morphine and could I just remind them again where the deeds to the house are.”
He currently sells his work on artgallery.co.uk and describes that as being “a very sustainable market place in future”.
And it’s particularly the case when you consider the cost of renting a gallery. Indeed, in just the last few weeks, Gary was quoted $3,600 per annum for a New York gallery to represent and market three works, plus commission on sales.
“I politely declined,” he says.
“I would like to be is in the log cabin studio in my garden,” he muses. “The ground is cleared already for it. The actual log cabin only exists in my imagination at the moment, but that’s where I’ll be, log-burning stove in the corner, decent coffee always on tap, the dog at my feet and several huge canvasses on the go at any time.”
“The wife’ll be banned from venturing up the garden path, and I’ll be on first-name terms with our local postmaster from handing bubble-wrapped canvasses over his counter for shipments most every day.”
So what’s his favourite painting so far? 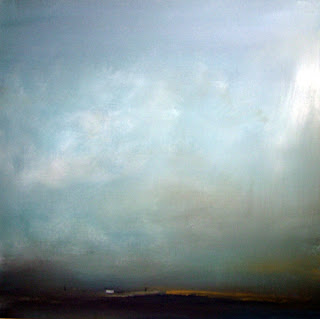 “The one that I hang above my desk is a small painting – 12” x 12” – that took me literally 10 minutes to complete and started off with me simply painting over a canvas that had gone wrong. (see left)
“Somewhere in those 10 minutes something came out of the paint and that’s what I ended up with.”
He says he’s heard “a lot of artists refer to ‘being in the zone’. It’s “the moment when you’re mixing colour and slapping paint on a canvas and you are not thinking about what you are doing”: so probably a bit like those prop forwards knocking seven shades of something or other out of each other on a rugby field, really.
“Everyone has a creative section of their brain, which is suppressed by their practical side. To lift up a paintbrush, to mix colours is all very practical – you can learn it very quickly: to be creative cannot be learned and just every now and again something just flips a switch and your creative brain dominates.
“It doesn’t happen often, but good work always comes out of it. This (see pictures at the start of this article) was literally just watercolour daubed on a sheet of paper while I was waiting for my wife to get ready to go out.
“Again it was 10 minutes tops – and it was the first painting that I sold on the internet.
“I’ve repeated the first one many times since, because its an easy one to copy, but the watercolour one defeats me every time I try and do it again – that’s the nature of watercolour.”

So there’s just the one of those that may end up in a Sotheby’s – and at least Gary gets the money himself these days.